[A few weeks ago a friend posted a notice that Gospel record store Reid’s Records in Berkeley was going to close the next weekend.  Poking around the internet, I came up with this article in Berkeleyside.  The dates seemed to be fuzzy, and the notice I got was a week later than one closing date I had seen.  And then, today, in preparing this post, I found on Reid’s FB page that Diara is planning to be open Saturday, November 2.  So you can still check Reid’s out.  But also, when I shared this with friends in Oakland, Austin responded with this gem.  LR]

I never was a gospel fan, maybe that’s why I ignored Reid’s even though I used to ride my bicycle along Sacramento Street right past their 3101 address.

memories I hadn’t thought about in decades. In my 20s and 30s I hung out in record stores, from small independents like Reid’s and El Cerrito’s Down Home Records to big independents like Berkeley’s Amoeba and chains like the then-new Tower Records. I was a traveling national reporter in the 60s and 70s and I had favorite record stores in half the states. No matter what was going right — or wrong — with an assignment, I always enjoyed a visit to a local record store. And yes, it was partly the joy of reading the album covers. I never was a gospel fan, maybe that’s why I ignored Reid’s even though I used to ride my bicycle along Sacramento Street right past their 3101 address. Blues and jazz and rock were more my taste. So I followed tiny used record stores like Grooveyard as they moved from one storefront to another, because I knew the owner, who was also the only employee, loved Abdullah Ibrahim and I might find a rare album of his in one of Grooveyard’s record bins.

The Reid’s article was framed to bring up how people work hard to build nests. . .

that human beings seek stability in a world that is ceaselessly changing. Capitalism speeds up change, of course, because change opens new opportunities for exploitation, which is the most cherished American freedom, the freedom to exploit.

And those thoughts took me to neighborhoods and gentrification. Not just the black working class Oakland that is being driven out by the flood of high rise luxury condos going up in the heart of the city, attracting Silicon Valley professionals with money to burn, driving rents sky high and smothering the nests that gave so many people so much pleasure in their heyday. There’s a 5-minute talking blues about Oakland’s after hours, mellow, down home juke joints of the 1980s that would come alive around 2am and go until 5 or 6am. It’s titled “Three Sisters,” by blues guitarist Frank Goldwasser on his “Bluju” album. When I was first getting to know San Francisco I paid attention to the Fillmore where black folks were being pushed out and the blues clubs were closing. I’ve never lived in San Francisco but I’ve studied it and the gentrification of the Fillmore was as real to me then as the gentrification of Oakland is now.

And those memories took me into memories of Chicago, where I was born. I didn’t grow up in Chicago, but back when I was a reporter I used to get to Chicago at least a couple of times a year and I alway took time to take pictures of those South and West side murals painted on crumbling slum building walls. Most of those are gone now. I was still doing that when the Wall of Respect and the Wall of Truth disappeared. And remembering that led me to a happier memory — the time a reporting assignment in Chicago led me to happen by a used car lot with a big sign that read “Drexel Chevrolet.” I suddenly remembered that my late father bought his first Chevy in 1948 from Drexel Chevrolet. So I stopped to take a look. As I stepped onto the lot a salesman left the office and headed in my direction. By the time he reached me I had spotted a 1967 Chevy van among the used 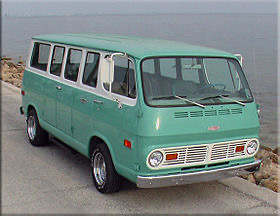 This is the body style of the van in Drexel Chevrolet; and it was the same color green without the white accents.

vehicles for sale. I happened to be in the market for a used van, so when the salesman greeted me I asked about it. He described it as having belonged to Muddy Waters.

Yeah, sure, I thought. I told him I wanted to look around and when he went back to his office I opened the door of the Chevy van. It was filthy inside. The floor was littered with greasy engine parts, cigarette butts, a few reefer remnants and quite a few used rubbers. When I rummaged through the glove box I found the original metal owners’ plate. It said this van had been sold to McKinley Morganfield.

Holy shit!! I thought. I jumped out of the van and headed for the nearest pay phone. I dialed information and asked for the number of McKinley Morganfield. It was listed. I dialed it. A woman answered the phone. I asked to speak to Muddy Waters. “He’s not home right now,” the woman said. “I’m his wife. Can I help you?” By the time we finished talking I had a complete history of how troublesome that van had been and why he traded it in at Drexel Chevrolet for a new station wagon. I used to go see Muddy Waters every time he performed in D.C., so I knew I had to have it. The salesman and I agreed on a price, I put a down payment on it, caught my scheduled flight back to D.C. and arranged another assignment in Chicago so I could drive it back home. I kept that van for 2 years and drove it from D.C. to California and back. Small stuff was always going wrong — door handles, window cranks, instruments, dashboard switches. But the big stuff, engine, driveline, cooling system, electrical wiring, all held together.