Posted by Eric Lee at LabourStart:

In what appears to be a breakthrough, the Sindicato Mexicano de Electricistas (SME) has lifted its hunger strike based on the government’s commitment to engage in negotiations.

The union sat down for the first time on Monday, 26 July, and the government has agreed to weekly negotiations.

On 27 July there was an assembly which resulted in a plan to send a caravan to Cananea in solidarity with the third anniversary of that strike.

SME has asked for international assistance and that we make our concern clear that the Mexican government reinstate the thousands of fired workers, recognize the legally elected union leadership and drop all charges against workers who have been involved in this dispute.

Support the campaign – take a moment to send off your message here:

[I live in a city that has borne the effects 0f mayoral control of city schools for 15 years.  Chicago, under the omniscient 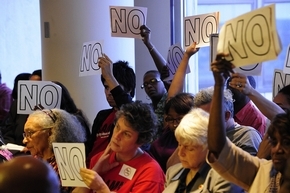 leadership of Richard (Daley) II, launched the school reform program emphasizing school closings and privatization, emerging on the national scene with the promotion of Chicago school CEO to national Secretary of Education.  It is no accident that out of such a maelstrom has emerged a broad based movement to combat the school closings and turnarounds, expressed organizationally as the coalition Grassroots Education Movement of community organizations and including the Caucus Of Rank-and-file Educators in the Chicago Teachers Union.  Nationally eyes have been focused on the Chicago plan as well as  the resistance movement in Chicago.  Teachers and their communities across the country have been talking with each other.  What some have seen in Chicago does not look so inviting.  Milwaukee refused to accept mayoral takeover of the schools.  Los Angeles, despite vigorous campaigning by Mayor   Villaraigosa, also rejected that direction.  Earlier this week, Detroit also rejected mayoral control despite  considerable lobbying by Governor Granholm.  The City Council rejected placing a measure before the electorate in the November ballot that would have ceded control of the currently elected school board to the mayor.  As opponents of the measure said, this was not about giving the voters their right to choose;  it was about giving the voters the right to never have to choose again.  — Lew Rosenbaum]

Here are two links to stories in  Detroit newspapers on this issue:

Sides agree on need for change — but not method